Architecture has been called the art of building beautifully, a fixation of man’s thinking, and record of his activity…  Keep in mind that last phrase. It is important.

Injeongjeon Hall, a South Korean National Treasure, is the throne hall of Changdeokgung Palace, it was used for major state affairs including the coronation of a new king and receiving foreign envoys. Originally built in 1405, it was rebuilt in 1610 after being burned down during the 1592 Japanese invasion, and a third time in 1804 after being destroyed by a fire.

Changdeokgung Palace, “Prospering Virtue Palace” — is set within a large park in Seoul.  It is one of the “Five Grand Palaces” built by the kings of the Joseon Dynasty (1392–1897).  The buildings of Changdeokgung blend with the natural topography of the site instead of imposing themselves upon it. It, like the other Five Grand Palaces in Seoul, was heavily damaged during the Japanese occupation of Korea (1910-1945). Currently, only about 30% of the original structures survive at Changdeokgung.

The Scottish Rite Cathedral in Indianapolis. Image via Raina Regan

One of the best parts about being a preservationist is access to interesting historic places. A second best part, is learning to look at the places around us in a different way. A graffiti covered barn is no longer the work of a hooligan, but is public art. The stoplight that catches you every morning on the way to work is not (only) a nuisance, but an opportunity to study what is happening outside the car windows. Preservationist and artist Raina Regan captures this beautifully in her year-end (photo) review. Be sure to click through for photos of Raina’s home base in Indianapolis and her far-flug travels.

Have you noticed the “young preservationist” trend? Not sure exactly what at means? You’re not alone. PiP explores the question and it’s implications in this post and in a follow up, Young Or Not Roundup. Her conclusion? “Preservation is a field that requires a united front, so let’s keep it that way. Avoid “young,” go with something more fitting such as “emerging professionals” and be glad for seasoned professionals. Together we are formidable opponents working to improve the quality of life through the appreciation of our heritage.” Here, here!

Before and after of one of the statues and niches on the building. Image via Scouting New York

A turn of the century building in Time Square left to decay by a defunct TGIFriday’s was recently saved by Express. The fast fashion house meticulously restored the exterior of the I. Miller Building and the results are fantastic. Way to go Express!  Check out more photos of the building and details about its history after the jump!

Molly Hatch: Tea Cups – Today is going to be awesome. 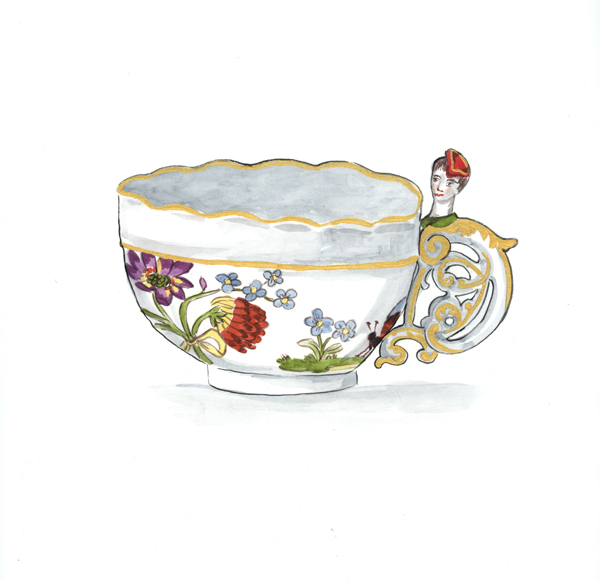 One of the teacups painted by Molly Hatch. Image via Today is going to be awesome.

“Last year, ceramics and visual artist Molly Hatch was so inspired by an article written in Selvedge Magazine about a curator at the Nordic Museum in Stockholm, Sweden who spent her entire career hand-painting a catalog of objects in the museum (pre-color photography) that she decided to embark on her own cataloging project. Yep, (with their permission, of course) Molly has been painstakingly painting the tea cup collection of the Clark Art Institute in Williamstown, Massachusetts. – Amongst its vast holdings, the Clark Art Institute has a sizable collection of historic teacups. According to Molly the majority of the cups were acquired over a lifetime of collecting by the museum founders Francine and Sterling Clark. Molly challenged herself to make a small painting of 300 of the cups in the collection. ‘These paintings serve as an artistic response to the historic archive of the collection, an effort to view the historic collection through the eyes of a contemporary ceramic artist and designer,‘ she says. In creating them, her paintings become a hand-painted artistic catalog of the collection. The cups Molly painted were originally collected by one family and are all 18th century porcelain. Molly chose these 300 because they are from the same era during which the curator in Sweden was painting her catalog.” Love, love, love this project! To see more of Molly’s beautiful and whimsical paintings click through to the original post.

The Lincoln Memorial, site of the “the greatest demonstration for freedom in the history of our nation.”

Dedicated in 1922, the Lincoln Memorial honors President Abraham Lincoln.   Martin Luther King, Jr. delivered his “I Have A Dream” speech from its steps on 28 August 1963. Just eighteen steps below Lincoln’s statue, the exact location where MLK, Jr. stood to address the crowd of more than 250,000 is marked by an engraving.  The memorial was placed on the National Register of Historic Places in 1966.

I missed last week, so here is two weeks worth of HP stories!

The Shard, the tallest building in Western Europe at 1,016 feet, was inaugurated in London in 2012. It got its formal name when the builders adopted the term used by critics, who called it a “shard of glass” in the city’s skyline. Image via NPR

What most struck NPR’s Ari Shapiro on a recent tour of London, was “the sheer number of cheeky, irreverent names that Londoners” give the 21st-century skyscrapers that which pierce their historic city.

If you’ve ever struggled to understand the National Register of Historic Places or explain it to a friend, try the National Register Rap on for size. Created by Historic Preservation program students at the University of Mary Washing, the NR rap takes us through the entire “bag of tricks” and even some of its limitations. (As much as I love this fresh take on a quintessential part of historic preservation, I do have to admit it makes me a little uncomfortable. Cultural appropriation has been a huge top of discussion recently, and I have to admit that I sometimes don’t know where the line between appropriation and admiration -as in imitation is sincerest form of flattery- is drawn exactly. Am I alone in this?) 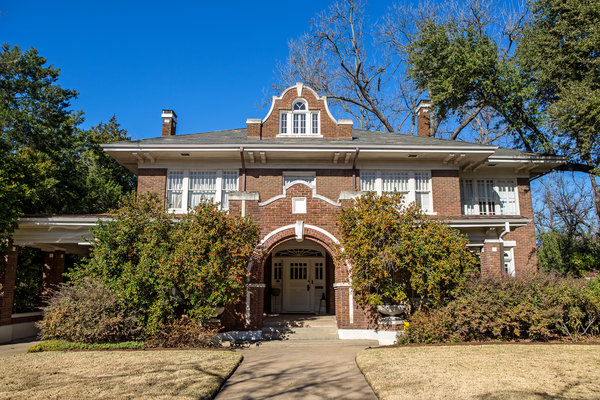 Fit for a Queen of Historic Preservation: Neither leukemia nor a daunting number of new constructions kept the author of “A Field Guide to American Houses” from extending her life’s work. Image via NYT

Virginia Savage McAlester co-authored THE book on American domestic architecture, A Field Guide to American Houses.  On the long awaited publication of Ms. McAlester’s  revision (which catches us up from 1940, where A Field Guide left off, to today), the New York Times gives us a sneak peak into her ancestral Dallas home and into the life of the woman who literally defined the American house.

Because I’m so excited about the publication of the 2nd edition of A Field Guide to American Houses, here is an article the focuses on the content of the book rather than the author.  The new edition, written by McAlester alone, “clocks in at 880 pages — 350 pages longer than the first.  The edition not only brings American styles into the 21st century but also expands earlier sections.  The heart of the updated book, though, lies in the new categories. Some, such as ‘ranch’ and ‘split-level,’ might seem obvious, while others required new terms. McAlester came up with the phrase ‘millennium mansion,’ for example, to describe the two-story, multigabled suburban homes that many think of as McMansions.”

In Franklin County, North Carolina century old documents were discovered in the basement of the county courthouse. Anyone who has ever done any sort of historical research knows that these types of records (marriages, deeds, court dockets, ledgers, etc) are invaluable. Arrangements were made for their preservation, and almost immediately work was underway. Soon, inexplicable road blocks surfaced halting the preservation work. And eventually, the documents were incinerated despite protests from the Heritage Society and the community… Click through to learn more about this intense and disturbing story.

Image via The Telegraph

The bodies, when they came, were often mummified. The two soldiers interred last September were blond, blue-eyed Austrians aged 17 and 18 years old, who died on the Presena glacier and were buried by their comrades, top-to-toe, in a crevasse. Both had bulletholes in their skulls. One still had a spoon tucked into his puttees — common practice among soldiers who travelled from trench to trench and ate out of communal pots. When Franco Nicolis of the Archaeological Heritage Office in the provincial capital, Trento, saw them, he says, his first thought was for their mothers. ‘They feel contemporary. They come out of the ice just as they went in,’ he says. In all likelihood the soldiers’ mothers never discovered their sons’ fate.

A Staten Island couple’s love story just got even sweeter, thanks to a saved receipt.  On Sunday night, Tony and Jo Fioravante celebrated their 66th wedding anniversary at the Waldorf Astoria Hotel in New York City, the same place they spent their wedding night, ABC News reported.  The octogenarian couple even paid the same hotel rate that they did in 1948 — $15.75.  They were able to snag the deal due to a tradition the hotel has of honoring the original rate paid by couples who spent their wedding night there and are now celebrating an anniversary of 50 years or more, according to Conde Nast Traveler.

A Black Church’s Dilemma: Preserve A Building, Or Our Identity? -NPR 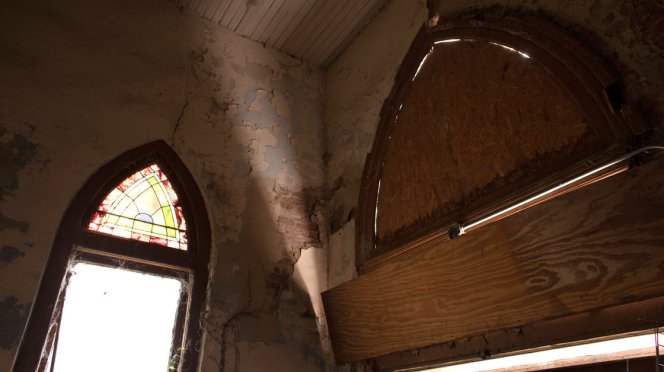 Heritage tourism is a growing industry but in smaller towns like Helena, Ark., finding the resources to save lesser-known landmarks is a challenge. Inside Centennial Baptist, pigeons roost along the hardwood floors and pews where parishioners once worshiped.This isn’t just an endangered, beautiful building from the turn of the last century. Centennial Baptist Church is a National Historic Landmark. However, restoration plans have stalled because  of a clash of personalities, and age-old racial mistrust…