Big box stores abandoned by corporate entities are difficult to reuse because of their large square footage. In McAllen, Texas an unused Walmart was transformed into the largest single story library in the US! It is now a vibrant community hub, and the city saved a bundle on infrastructure. What other uses can you think of for adapting big box stores for new uses? Schools, Fitness Centers, Lazer Tag, Indoor skate park!?!

Harding Park began its modern life in the early 1900s as a summer resort community for New Yorkers looking to escape the city. After WWII, they became permanent residences. Many of the tiny bungalows remain untouched, while others have been expanded. The neighborhood is charming and totally uncharacteristic of the Bronx. There are chickens!

If You Build It, They Will Come: How Cleveland Lured Young Professionals Downtown – The Atlantic Cities

“When the Maron family decided to redevelop an entire city block in downtown Cleveland, the area was so blighted no restaurateur would lease space there. A decade later, the East Fourth neighborhood is home to Food Network personalities, a House of Blues, and free Saturday yoga classes. Café-style seating spills into the pedestrian-only street. Apartments on the block are fully leased, and a 100-unit building under construction across the street has already reached full capacity.” Click through to learn more!

In South Carolina, logging crews are cruising rivers in the hopes of finding old growth wood preserved in the mire deep below. Using old railroad maps as guides to find the sites of former saw mills and sonar technology they are able to harvest logs long buried in the muck. These old growth trees with tight growth rings and distinctive patterns are highly prized by carpenters, because they are rare. Long ago, most of South Carolina’s (and the US’s) old growth forests were logged.  A single log dredged from the river can fetch more than $800 on the market!

A herd of more than 100 goats will be grazing at Congressional Cemetery — where luminaries including J. Edgar Hoover and John Philip Sousa repose — as part of a demonstration project to show off the animals’ ecologically friendly landscaping skills – “eliminating vines, poison ivy, ground cover and even fallen debris all the while fertilizing the ground,” promise the organizers of the event, the nonprofit Association for the Preservation of Historic Congressional Cemetery and Annapolis-based Eco-Goats. I would also think that using goats is more preservation friendly – using large equipment to mow the lawn, clear debris, etc always has the potential to damage monuments!  What a great idea!

Yesterday, I told you all about the Lexington Fire Department’s use of horse drawn emergency response units until 1926 and the 3 fire stations still in use that were designed to accommodate horses  in the post deTour: Lexington Fire Station #1.  Well, all that horse talk reminded me of this little oddity: the last commercial stable in downtown Lexington.

The stable is located on Saunier Street, a former alley.  The existence of the stable is a great reminder of why alleys exist – they were intended to be service corridors for stables and horses and other unsightly amenities.  Saunier runs through a block of  large Victorian houses on one side (West Second Street) and commercial/religious structures on two other sides. The alley would have contained amenities and businesses that served or supported those businesses and residences, like this stable.

The ca. 1900 stable features much more decoration than would be expected for such a utilitarian use.  It has a highly articulated Dutch gable parapet with brick corbelling supported by brick pilasters and an arched center bay opening (presumably for the horses and carriages to enter/exit).  All of the lovely architectural detail on this building, I think, could easily fool the casual passerby.  Luckily, the center bay door currently sports a great horse motif, which hints to the building’s use!

These days the stable houses the Lexington Livery Company, which offers carriage tours for every special occasion from proms to funerals. So, not only is it the only remaining commercial stable in downtown Lexington, but it is STILL being used as a commercial stable over one hundred years after its construction.  It also means that Lexington, Kentucky, the horse capital of the world, has horses living and working right in it’s downtown. Now that is a city staying true to its heritage! 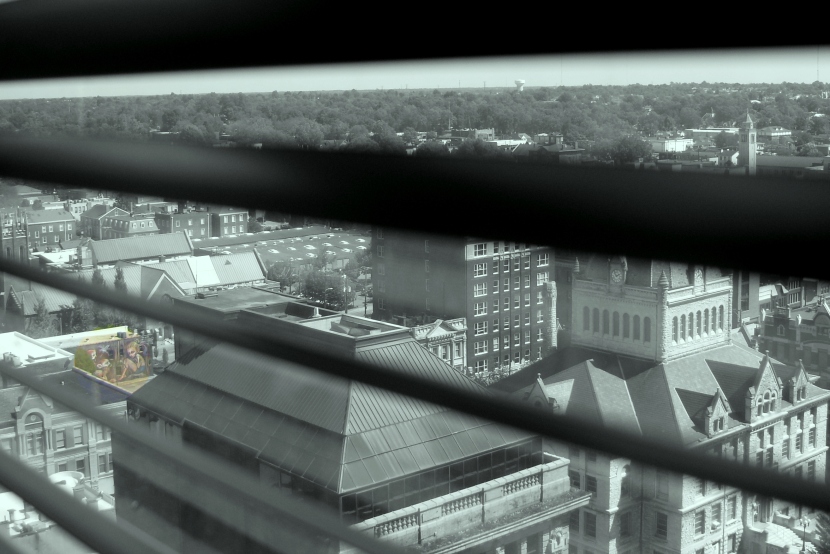 Herakut’s “Lily and the Silly Monkeys” is keeping downtowners company throughout their work day.

It is interesting how one little change in the landscape can transform the view from so many vantage points. Lilly and her pals can be from Main Street, Short Street, Cheapside Park, and from the windows of tall buildings blocks and blocks away.

Click the photo to read my post on Herakut’s visit to Lexington and some of the preservation concerns linked to public art!

If you walked outside of your house or office building or classroom right now, what would you hear? Really think about it.  Are you in a busy downtown, an office park, in the country, on a college campus?

If I walked outside right now into downtown Lexington, KY, I would hear the hum of traffic (and the echo of the traffic off of the tall office buildings around me), the rush of two sizable fountains nearby, the chitchat of the huddle of smokers just down the sidewalk. If  I was outside on the hour, I would hear the sound of the Old Courthouse clock tower chime.  The bell, the heaviness of the traffic, the fountains – they all orient me in time and place.   Today, I am near the Old Courthouse and the fountains, at rush hour, on the hour,  in modern America (modern cars noise, modern American speech).

What would you have heard 100 years ago? 150? Something quite different, right?  Even if you are out in the country on a farm, I suspect the sounds would be different – tractors versus plows,  the variety and number of animals, the sound of distant traffic… unless you are very isolated (in which case, kudos to your internet provider for keeping you connected way out there!).

If I stood in the same place in Lexington and wound the clock back 150 years,  I would hear the sound of the traffic, though it would be more of the four-legged-possibly-hitched-to-a-wagon/carriage/coach variety. I wouldn’t hear fountains. There would still be the sound of smokers and pedestrians, but they would sound like 1860s Americans.  The courthouse clock would still be there to chime on the hour. And there would also be another sound to let me know I was in downtown Lexington – the sound of the Town Branch.

Lexington was built on a branch of Elkhorn Creek (as evidenced by the slightly off-compass orientation of our downtown grid).  While it was an essential resource to early settlers, by the mid-19th century, the creek was buried to expand valuable downtown real estate. It now runs beneath the streets and buildings, unbeknownst to many who live and work here, totally inaudible – until now!

Thanks to an art installation by Bill Fontana, the sound of Town Branch Creek is back in the mix of downtown sounds! The sound sculpture, Surface Reflections, provides a live audio broadcast of the Town Branch flowing beneath the streets via a series of speakers installed in  the passageway between the Lexington Financial Center and its adjacent parking garage.

The passageway is a meandering wooded spot, where traffic sounds are muffled.   LexArts president and CEO Jim Clark said of the location,  “it gives you the natural versus the urban. [Surface Reflections] will add to that.”  I would argue that it also adds a historical note to the downtown “sound-scape” that has been missing for over a century.

Of course, I am not advocating for some sort of ordinance to protect the characteristic sounds of a city or landscape. (Other than archiving audio files of the sounds, could the sounds that define a city even be protected?)  But, its an interesting concept – how does sound shape our places, orient us to place and time? What sounds are unique to your city, neighborhood, or countryside? Are any historical sounds missing?