Did you know that historic preservation is green –  as in sustainable  and environmentally responsible? 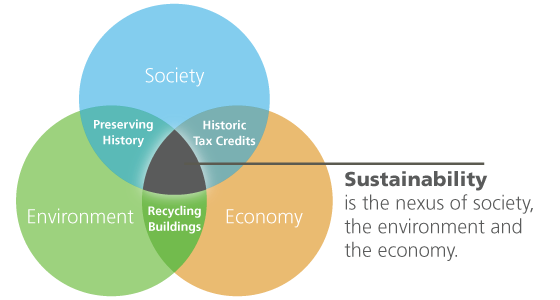 “A commonly quoted phrase, ‘the greenest building is the one that’s already built,’ succinctly expresses the relationship between preservation and sustainability. The repair and retrofitting of existing and historic buildings is considered by many to be the ultimate recycling project, and focusing on historic buildings has added benefits for the larger community.”

I’m overly familiar (thank you grad school!) with some of the titles, while 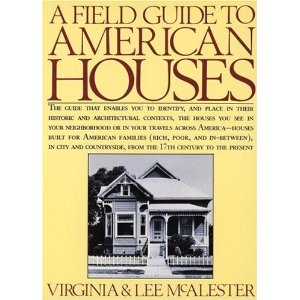 others are new to me. I’m particularly interested in checking out From Animal House to Our House: A Love Story after reading a few great reviews  of it around blogland recently . But I was also surprised that a few titles were missing (A Field Guide to American Houses, anyone?).

I was really happy to see that Donovan Rypkema’s The Economics of Historic Preservation: A Community Leader’s Guide  made it on the list.  Successful preservation more often than not starts at the grassroots and more often than not the most persuasive argument for preservation is an economic one. Rypkema’s guide is very clear and easy for even the most financially-challenged (ahem, me) to understand.  I had the good fortune to hear Rypkema speak about the economics of preservation at the University of Kentucky’s 5th Annual Historic Preservation Symposium in 2011, which focused on Adaptive Reuse.  He was a dynamic speaker and a lively Q&A followed. Hands shot up all over the room the moment he opened the floor.  He was just as articulate and effective as his book when fielding questions and responses to his presentation. I think a lot of people walked away from his session with a back pocket filled with new ideas for approaching preservation.*

Are there any essentials you would add?

*In the interest of full disclosure, I feel that I must admit to being a part of the 5th Symposium’s planning committee and to having lunched with Mr. Kaufman after his session.  He was incredibly gracious with the HP Program students and faculty.

Rypkema addressing the panel of experts and standing-room-only crowd at the 5th Annual HP Symposium, 2011

Until recently, downtown Lexington, Kentucky has not been a destination. The office buildings and sidewalks emptied at about 6pm every day and were fairly deserted on the weekend, with only a few exceptions (ahem, basketball season).  In the last few years, the city government placed a new emphasis on downtown by providing funds for a permanent Farmer’s Market and for events like Thursday Night Live, which encourages people to be downtown during non-business hours.

Downtown Lexington’s revitalization received a boon when it was announced earlier this year that the developers of the highly successful 21c Museum Hotel chain planned to develop its 4th boutique hotel/ museum/restaurant hybrid in the heart of the downtown district. Last week, the Courthouse Area Design Review Board gave the hotel  conditional approval for its planned renovation of the historic First National Bank (FNB) building on Main Street. I think this project is going to be really important to Lexington.  It is a counterpoint to the Centre Pointe debacle, has the potential to be the highlight of recent revitalization around the old courthouse, and will further prop up the economy in downtown. 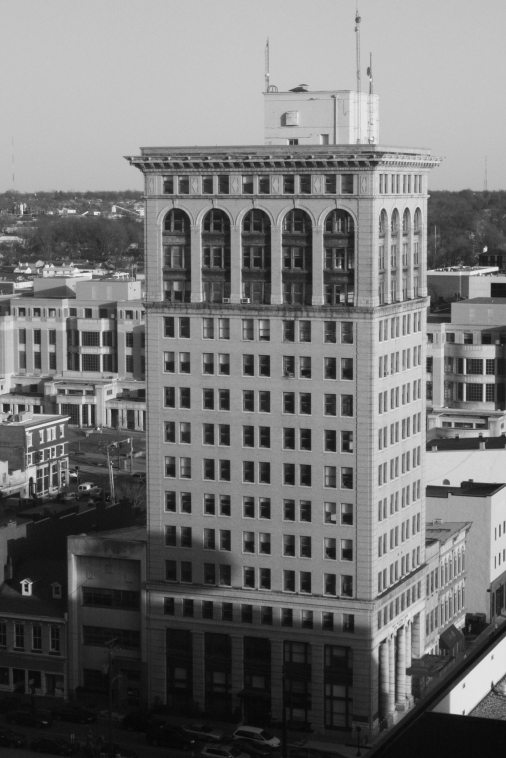 21c’s hip and trendy flagship opened in Louisville in 2006.  Located in a 19th century former tobacco and bourbon warehouse, the 90 room hotel features rotating, curated art exhibits in its gallery spaces as well as an award-winning restaurant. After its debut, the New York Times called the project “innovative.”   It was featured in the top 10 Conde Nast Traveler Reader’s Choice picks in 2009, 2010, and 2011, and was applauded by Travel and Leisure.

The developers and architects worked closely with the city and SHPO, and it  is generally regarded as a preservation success story  and as a successful adaptive reuse project. It has been an asset to downtown Louisville that has inspired other adaptive reuse projects, such as The Henry Clay (a hotel located in a former YMCA building).

Hopes are high that Lexington’s 21C will be just as successful from a preservation and adaptive reuse perspective.  The stakes are high.  The building 21c plans to develop is not only Lexington’s first sky scraper, but was designed by the famed architecture firm McKim, Meade, and White.

Constructed in 1912, the FNB building is a classic Beaux Arts sky scraper with an ornamental 4-story base replete with ionic columns cut from bedford stone, a plain shaft and decorative cap with arched windows, decorative metal panels and stone cornice.  It is still among the tallest buildings in Lexington.   For many years, the FNB building has been leased as office space, but has remained partially unoccupied.

Fortunately, it was announced early in  project development that 21C plans to seek historic tax credits (HTC).   Using HTC practically ensures the retention of the building’s defining characteristics and historic character because the hotel will be working closely with the city, state, and the National Park service. The McKim, Meade and White design should remain intact.

The plans announced earlier this week are promising.  They include the retention of the First National Bank building’s original windows, store fronts and metal relief panels.  They also included plans to occupy the adjacent 1872 Fayette Building, where it will restore a recessed storefront and its retractable awnings.  The development boasts 80 hotel rooms, an upscale restaurant with sidewalk seating, a two story penthouse with a rooftop garden, ballroom, fitness center, meeting and conference spaces, as well as gallery space. 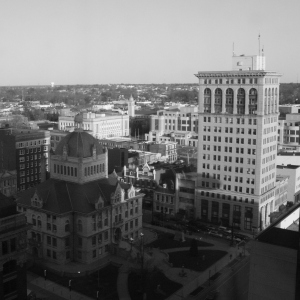 A distinguishing characteristic of the 21C brand, other than gallery space, is the red penguin sculptures that decorate its buildings. Lexingtonians were reassured this week that there will be no red penguins (the team color of UK rival the University of Louisville) in downtown Lexington. Instead, they will be University of Kentucky Wildcat blue.

Centre Pointe and the Courthouse Square

The FNB building is  located on a pivotal corner. It is directly across Main Street from Centre Pointe and is next to the old courthouse (across North Upper Street) around which much of downtown’s revitalization efforts have focused.

In 2008, an entire city block dating from 1826 was demolished to make way for a multi-purpose development, despite the best efforts of preservationists and community members. Subsequently, the project’s financing fell through. At the time of this writing, the Centre Pointe project is a large grassy field.  In some ways, the debacle brought preservation to the political forefront and it has been a catalyst for preservation friendly development in downtown.  Lexington’s 21c will overlook that empty field – some would say that it will be a perfect foil to the failed project. 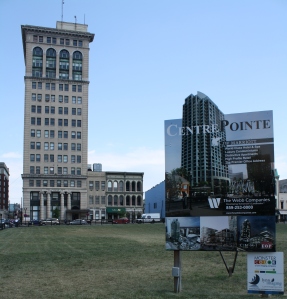 Across North Upper Street from the FNB building, is the old courthouse. While a lot of downtown revitalization efforts have centered around the old courthouse square, the court house itself is in a very precarious position.  When the courts were moved to new facilities a few blocks away, the old courthouse became the home of several Lexington history museums, but the complex was shuttered this summer due to lead paint.  It is hoped that  bringing new business to this corner will hopefully raise awareness and funds for its preservation (it has  Tibetan Revival elements!), if not a restoration to its original floor plan which was dramatically altered in the 1950s. (Expect to see a post about the old court house soon).

Preservation aside, the bottom line for any project like this is money and the economy.  Lexington’s mayor, Jim Gray, said of the project, “At the end of the day, it’s about jobs and what it could do for our economic growth”  21c will provide temporary jobs during construction and 150 permanent jobs when it is complete.  It will also enhance downtown Lexington business prospects.

“It really does elevate Lexington downtown to another level,” Gray said.  “It’s a remarkable use of the space; 21c is a destination in itself, so it has that added benefit of pulling people into it, and leverages the benefits for everything around it,” Gray said.  It “will have a real gravitational pull. It helps the old courthouse and helps illuminate the value of that property.” 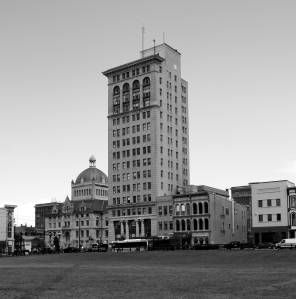